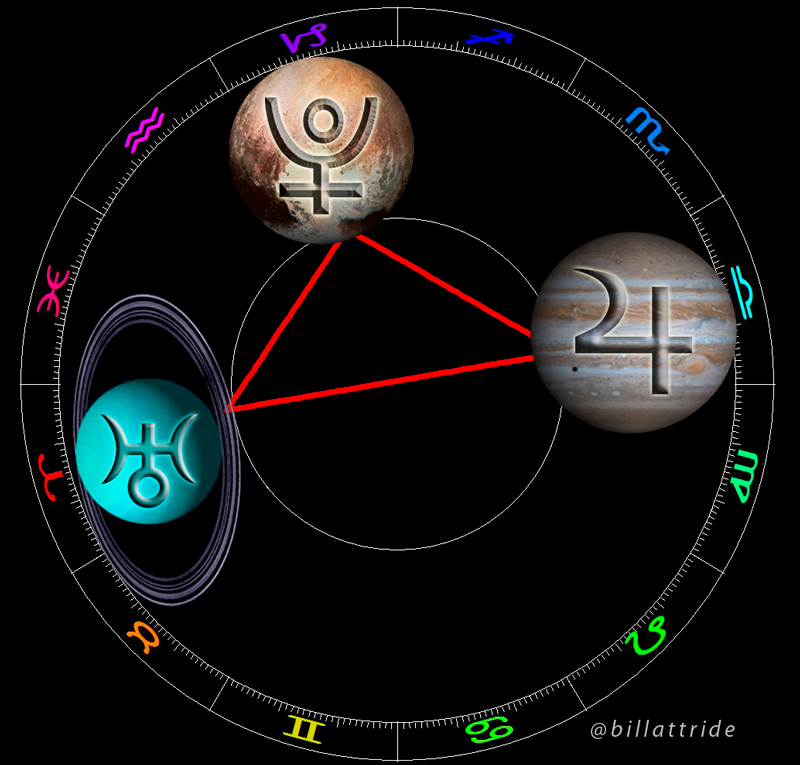 A New Year is upon us, and you need to know what do the signs in the heavens portend? You can perceive the facts or reality of your world as they appear to you. But what is behind that appearance or phenomena of reality. What are the “Noumena” behind the appearances? What are the deeper forces coursing through your world that can inform and guide your journey today? What you need to know is “Where” am I now?

As 2017 begins two major alignments are in place: Jupiter is Opposite to Uranus from December 2016 until September 2017; and, Jupiter is Squaring Pluto from November 2016 through August 2017. What this means is that you are going through something this year that is somewhat like what you encountered in 2013. That was when Jupiter was squaring Uranus; and Jupiter was Opposite Pluto.

This also serves as a reminder that the major aspect from 2012, of Uranus Squaring Pluto, is still here in 2017. The Uranus/Pluto aspect is the major theme of this decade. Their relationship, along with Pluto moving through the sign of Capricorn, forms the fundamental Energy-Form, the deepest melody of spirit, constituting our challenge and opportunity to find a better integral balance of Freedom and Order. This ongoing challenge is still thrumming through your world this year, (just as it did during their conjunction in the 1960’s, or their previous square in the 1930’s…and yes, many people have noted how similar “our” time now is to those two periods…and they are correct to do so).

But for our period there is an added over-tone, the march of Pluto through Capricorn, (from 2008 to 2024), also carries the echoes of its previous passages through this sign, (1516-1532 and 1762-1778). The earlier period accompanied the breakup of the Feudal Order, the rise of Absolute Monarchies, and the splitting of the Catholic Faith; the latter period accompanied the Fall of Monarchies and the Rise of Parliamentary Democracies. Each time an old world was superseded by the emergence of a new Spiritual-Political-Cultural-Economic order. Each also witnessed the emergence of a new kind of “human”, as New Thought-Forms and New Forms of Self-Realization co-created a new kind of human, a new human-kind.

The peoples of those periods, as we in our time, found themselves in a “world turned upside down”, with social bonds breaking, institutions collapsing, and the withering of old sources of influence or power and the emergence of new ones. For us, as it was for them, we also find our very way of life, and the institutions that are supposed to embody, preserve and protect our society and culture, seemingly falling apart around us.

The good news? Our forebears survived, and prospered…and so should we. We have been here in some way many times before, and we will find our way through this trouble-filled time too. For this year, (and always), you can rely upon the Wisdom of the Stars, as conveyed to you especially now by the twin messaging of Jupiter Opposite Uranus, and Jupiter Square Pluto.

Jupiter is the Avatar of Philosophy, Science and Religion. It forms and informs how you relate to your world, as it represents the beliefs that shape and guide your actions. During its three passes over Uranus and Pluto it will be shining this light of understanding from the Sign of Libra as it is modulated by Uranus’ position in Aries, and Pluto’s in Capricorn.

Uranus/Jupiter:
The message of Uranus/Jupiter addresses the delicate balance (or the necessity of maintaining an ever-present and dynamic equilibrium), between, 1) Being more truly oneself as an individual, (Uranus in Aries), while at the same time, 2) Evolving greater social intelligence so that in any relationship you can bring about a mutually beneficial experience of self-fulfillment in your relationships with one another, (Jupiter in Libra).

Uranus in Aries argues for Freedom for the Self above all; Jupiter in Libra counters with the reality that "Reality is Relationship", that the Universe is a web of inter-connectivity and without this nothing (and no one), could exist. Taken to extremes, which opposing planets can often do, you have Absolute Individuality opposed by Absolute Community. What are you to do?

As always, the path of truth is found “in-between”, upon that noble middle path of integration. Each of these truths, Individualism vs. Communalism, each of them depends upon the other, are truly part of one another. Each taken to an extreme is anti-spirit, anti-truth. Only by holding and balancing them, one with one another, only there can you find the weaving-way of your true spiritual nature.

Each of us is a unique spark of the Divine; yet each of us is also the very collective-creation made from all our interactions/interrelationships with one another too…We are each a unique “one of a kind”; but we are all of some “kind”, inseparably made by one another and of one another, and so out of the many we are also One.

Pluto/Jupiter:
The message of Pluto/Jupiter addresses the equally delicate balance between, 1) Exercising your Will/Power as articulated by the various hierarchical roles in your culture (Pluto in Capricorn), while at the same time, 2) Guiding that Will’s application by the social contracts (implicit and explicit) whose basis is formed by the Beliefs-Truths of your culture that become enshrined/enforced into Laws, and that these Ideals are what shape and determine what is the rightful exercise and limits of your will (Jupiter in Libra).

Pluto in Capricorn has been exerting tremendous pressures since 2008, and these cathartic waves have eroded the normal institutional foundations as well as constraints for Will and Power in your world. These transformational forces of Pluto are disrupting the institutional structures of power, creating a loss of confidence in institutions as well encouraging the emergence of new, contending sources of Will and Authority.

Reactionary forces, seeking to preserve power and privilege, by seeking to hold onto their prerogatives, become ever more abusive of their power. Meanwhile, the emergence of new sources of power and will puts them in contention with the old ways, and further erodes the confidence in the reality structures of your world. Both the legitimate and abusive attempts to preserve the old, and the creative and destructive attempts to replace the old order, lead to ever greater crises in your institutions and culture.

Pluto in Capricorn is doing what it is supposed to do, tearing down the old ways so that a New World can come into being. Jupiter in Libra can provide a beacon of light as you seek to find your way in a world careening through fractured realms of reality/myth, fact/falsehood, truth/lies. The principle questions are: from where does any wielder of power derive their Authority; and what guides and limits their exercise of their Will and Power?

In our time, as in those previous periods of transformation, the answers will not be found in the latest iterations of Right vs. Might. Rather, whenever this catharsis and re-birth of society shakes the foundations of a world, it shatters the appearances of things to reveal once again the greater truths upon which your Journey in Spirit will forever remain centered and secured.

A world must pass for a new world to emerge, but the core elements that bind together all the worlds that were, are and are yet to be remain. Look to the Great Ones, the teachers who serially come forth to re-state the Ancient Wisdom. More than their thoughts, look at their way of being, how their embodiment of Universal Truths in their lives shine a light for us to follow. The teachers do not require or need your worship; they have come to inspire you to life a spiritually integral life.

With regards to “human” laws, look to the sacred history of the great lawgivers, the Laws of Manu in India, to Babylon and the Codex Hammurabi, to the Laws of Rome, our own Declaration of Independence, to the Declaration of the Rights of Man and to the Universal Declaration of Human Rights. All these human laws find their Fountain-Source of everlasting Truth in the Fundamental Teachings of all Ages, The Ancient Wisdom.

A core principle, a fundamental Law of that Ancient Wisdom is this:

Every speck and mote of this Creation, every being, world and Galactic System has at its core a spark of the one Divine Flame. This core of Light and Love anchors the Sacred Space within which that being abides. It is by and through this Sacred Center of Love-Light that every Life-Consciousness-Spirit finds their own center, their own space of Will-Power, and yet this truth equally affirms our essential connection to one another too. For what abides in that center of one and all is a Divine Spark of the One Divine Light. Truly we are inseparable, because of our origin in the One, and through all our many Lives and Loves we are held together, all our little Wills held in loving understanding by the Love and the Will of the One.

Therefore, whomever you encounter is another just like you. In fact, in their heart of hearts they are already of you and you are of them. This law, founded by your origin in and of the One, and bound together by your sacred center that is a spark of this One, means that before me is another self-luminous dew-drop of the one Divine Light. To bring about or cause harm to this or any other is to irrevocably do equal harm to myself.

This is The Law of Karma: That whatever you create, whatever action, feeling or thought you make will return to you. This is the source of the Great Teaching regarding relationship found in all sacred teachings:

“Do unto others as you would have them do unto you.
For you are all related, and what you do to the least of these,
You do unto me, The One."

This is Sacred Law…

This is the Source of Right and Truth…Love.

Next, “Whither are we going?”