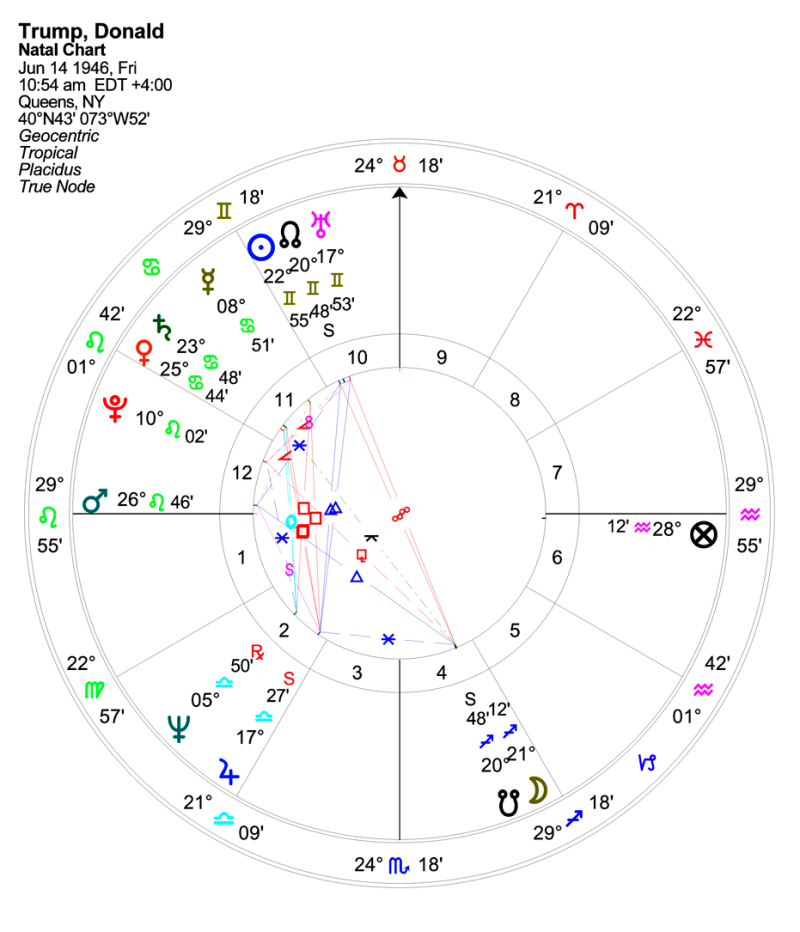 The timing for planetary transits will often cross over from one calendar year to the next. During 2016, there were two very significant transits to Trump’s chart, Uranus squaring his Saturn from spring 2016 until early April 2017, and Pluto squaring his Jupiter, which is in effect from spring 2016 and will last until the late fall of 2017.

Uranus aligning with Saturn in a “strong” manner such as this will occur about every 21-22 years or so. Whenever this transit occurs, Reality is shaken and can in fact be shattered; it is a call to reform/remake that reality (or your understanding and interfacing with Reality), to deal with the necessity for change. It can appear as a great loss; but it is equally the call to seize the opportunity for a new way of being. For Donald, the two previous passes were 1994 and 1973-74.

The more recent date coincided with his successful escape from his failing casino ventures by “going public”; he ended up selling shares in his privately owned and deeply indebted enterprises. He transformed his “reality” from a failure to success. He “socialized” his debt and came out a winner. In the earlier period, the Trump Organization, his father and he, were charged with a consistent and very long practice of racial bias with regards to their rental property empire, in Brooklyn and Queens. They were found to have used various tactics to deny leases to “people of color”. Uranus forced them to change their illegal practices and conform to Reality, to abide by the letter and spirit of the law.

Given the prominence and importance of Uranus in Trump’s chart, he will respond/react even more noticeably than most to this influence. As I noted in the previous essay, Trump is very much a “Uranian man”, with both his Sun/Uranus and Moon/Uranus alignments. His self-characterization follows this theme of Uranus, in his often-stated assertion of being an exceptional man, a genius to whom the normal rules and norms will not apply. He believes in his specialness. He will blaze “new trails”, he will smash the “icons” and break the “boundaries” of normalcy. Trump will most certainly be the carrier for and instrument of change; he will be disruptive and destabilizing.

Saturn is the Avatar of Reality, the structures of personal and professional life, but it also indicates where you will encounter the “shadow” in this life. It is where you have old wounds and fears. But it will be also, by your efforts to deal with your shadow and fear, it is where you may end of wielding your Authority, where you may find your “Role”.

For Trump, with Saturn in the sign of Cancer and in his 11th house, his fears would be centered upon his experience of nurturing and care-giving, the question would be whether he felt secure and happy in his childhood, or did he experience nurturing/security as something that was lost or was never truly there. It is the challenge of Spirit, to realize that each of us must find our way to our own true self, and so become truly centered and stable individuals. Then we are to use that experience to help others find their way to their center and security too.

And, with Saturn in the 11th house, he would long for true friendship, and would feel his destiny is to become a leader of a group or groups. But, he would likely suffer from the experience of various forms of alienation, of not fitting in or belonging, of being “different”. Trump, if not healed of this Saturn test, could end up leading in a group or a cause that was not truly of him.

In 2016-17, Uranus squaring Saturn has elicited once again Trump’s promethean ability to confound the “status quo”, by rebelling against the mainstream in both political parties. He finds himself as the figurehead riding a wave of populist anger directed towards elites and the status quo. More than a few observers have noted the irony of a billionaire, who has pushed the envelope of bending financial regulations, norms and boundaries for his personal gain, having become the leader of a movement born out of the outrage erupting from these very abuses of privilege.

But it is the second major transit, of Pluto over Trump’s Jupiter, that reveals a more complex story with his present rise and exercise of power. Pluto is the Avatar of Will and Power; Jupiter is the Avatar of Truth, Science, Religion and Law. When Pluto is moving over Jupiter in a challenging manner, perhaps twice in a lifetime, the combination of the planet of Power and the planet of Expansion and Growth may lead to tremendous opportunities. But, if this power is mishandled or misdirected it will lead to great difficulties with Justice and the Law.

The previous passage of Pluto to Trump’s Jupiter, a conjunction or planting of a seed, was in 1978-79. This was exactly when he became known as a premier developer. By taking advantage of the difficult economic conditions in the US economy in general and in NYC, Trump was able to arrange a “sweetheart deal” of a 40-year tax abatement in constructing the Grand Hyatt hotel at Grand Central. Most significantly, this was also when Trump leased a site on Fifth Avenue, just down from Tiffany, and built his signature building and current home, known as Trump Tower. This was when Donald Trump became a national name and brand.

In 2016-17, almost 40 years later, Trump has Pluto passing over his Jupiter once more, but this time it is the square aspect which means there will be a much greater challenge and choice in how these energy-forms will combine. The planting of the seed of Pluto/Jupiter in the late 70’s has brought him to this major crossroad and fork in his life. The question will be put to him regarding the exercise of Power as informed, guided and so directed by his Beliefs.

The Plutonian “Test of Power” is an awesome yet challenging experience. Fundamentally, the question for any individual, in exercising their will in any realm, whether that be confined to just the first circle of the family, or in one’s immediate community, in a business or other large enterprises, on up to the leadership of a major world institution, (like the USA), the question will be for that individual:

The “Test of Power” will come to all of us in many forms. It will always concern this spiritual truth:

We are all vehicles for channeling and focusing the power(s) that we have developed or have had conferred upon us. If we serve “the Source of this power”, understanding what is to be used for, then we will remain centered and grounded in the right exercise of our duty.

If we mistakenly believe that somehow “we are the power”, if we become “inflated” or infatuated with self-referential absolutes and unquestioning certainties, then like in all the great stories, whether in Greek mythologies or the Political dramas in Shakespeare, in the historical examples of leaders such as Napoleon or Richard Nixon, for those who come to believe they are “it”, it is inevitable and necessary that they must fall. What we will always see is that when a human commits the classical error of “hubris”, then it will not be very long before their misuse of power is followed by this reaction, a consequence that they have brought upon themselves through the agency of karma known as “nemesis”.

Really, it is all about Karma, of action and reaction. And the test of power is one of the most profound. That is why we look to those who assume greater authority, to equally be exemplars of humility and grace. This not only protects them but also reassures those over whom they rule that there is a rightful ordering to the world based upon trust and mutual respect.

Trump is facing his greatest test of power, of how well he will faithfully follow the rules governing the exercise of Presidential Power. When Pluto reaches his Saturn in 2020, we will perhaps see the next or final chapter in how well or poorly he understands his test of power and humility.