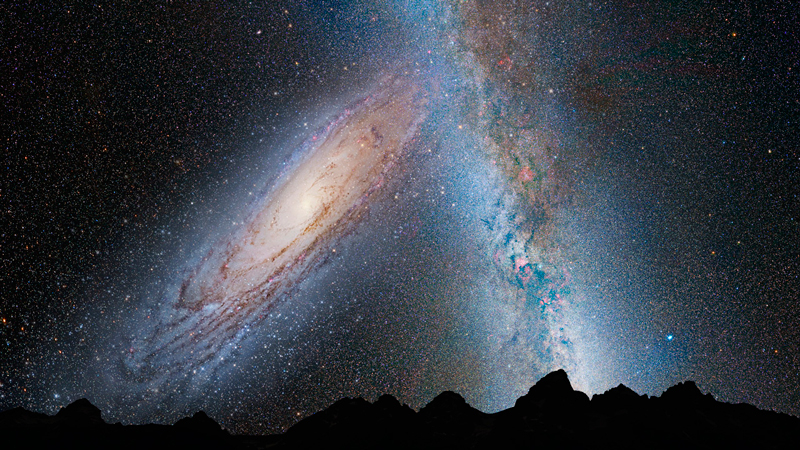 The Merging of the Milky Way and Andromeda Galaxies – in about 4 Billion Years!

As I noted in the previous postings, certain planetary influences that have been in place are giving way to new ones; but other starry modulations will remain in effect for some time to come as well.

Saturn has moved into Capricorn where it will remain until 2020, and Uranus will be in Taurus starting in May 2018, (though it will retrograde back into Aries for a few months, from November 2018 until March 2019), and then move into Gemini in 2026. With Pluto still in Capricorn too, this means that we will have shifted to a much more “Earthly Elemental” period for the next few years. The days of making real are upon us now; from the personal to the worldly, the time for Theorizing-Temporizing is over. What matters now is what works, what is more useful or necessary, or in Spiritual terms, what is more Integral, Integrative and Holistic.

Pluto:
Looking at the Hierarchy of planetary Lords we find that Pluto will be in Capricorn until 2024, and with it the end of an age continues to unwind around us all. The very structures we depend upon to uphold and maintain our way of life are undergoing the greatest challenge they have ever faced in 240 years. Though it would seem to many (if not most), that the problems we face are “out there” in these Institutions, (cultural, economic, political), as always, the real spiritual challenge is laid before each of us, in our minds, hearts and wills. What we seek to preserve and what we must change cannot happen “out there”; it will not, it cannot happen until it happens in each of us as individuals; and then we must join together in meaning-filled lives, forming one another into ever greater wholes or spaces of self-realization. We will be the change that is coming, we will individually and collectively transform and restore our communities, cultures and institutions.

Neptune:
Neptune remains in its own sign of Pisces until 2026, (2011-2026), bringing to bear the most extraordinary influences of Inspiration and Spirituality, stirring Faith and Dreams, and providing a renewed fountain-source for Art and Imagination just as it did during its previous Piscean sojourn from 1848-1862. But because of this, the Veil between the Hierarchies or Planes of Existence are much thinner now, and we need to be more careful to remain centered so as not be swept away by enchantments; we need to be wise and centered, or risk being swept into the swirl of false visions and the false promises of those claiming to be inspired. You must not stumble through the self-delusional hall of mirrors that are part of the lower Astral Plane. Neptune is Inspirational and trans-Dimensional, it is the way you move from one level of consciousness to another, moving beyond the boundaries and borders of an old Reality-Structure into a more encompassing experience of the Greater Reality. But that means it can also lead those who may lack enough understanding, love or will into Astral Fantasies that may well turn into Nightmares. Remember, Psychic abilities and phenomena do not equate to nor indicate Spiritual development whatsoever. The path of Light is paved with Wisdom, Love and a Centered Will.

Uranus:
Uranus by May will have moved into Taurus, and will remain there until 2026, bringing upheavals and revelations to the hierarchy of values in your world. As in any planet moving from Fire to Earth will indicate, the elicitation of New Ideas for the past 7 years will now give way to the necessity of folding these reformed or new ideas into ever-more resilient Reality Structures. Old value-forms will be challenged, but the essence or truth of what is good or what is beautiful, well you know, that never really changes. The old forms and formulations must change to free the truth within, the everlasting Values must be freed from these worn-out bodies. Beauty and Love are found in motion, in Life that is Spirit, and that is why these forms must pass so that Spirit may enter new ones.

Saturn:
Saturn in Capricorn means that we have three major planets moving through Earth now, with Neptune providing a (probably very useful) counterpoint/counterbalance from that most watery Water Sign, Pisces. The tests of the world have move on to the Earth plane; for one and all we have moved into the Test of Responsibility, the Test of Self-Fulfillment.

Jupiter:
Jupiter is in Water too now, but will enter Sagittarius in November 2018, then Capricorn in 2019. At the end of 2020, as Saturn moves into Aquarius for the next few years, so will Jupiter enter Aquarius too, and we will experience something we have not had since 1842.

The 20-year cycle of conjunctions of Jupiter and Saturn will “transition” from Earth into Air Signs. This is called the Great Mutation, one of the principal “time-keeping” cycles of Astrology, and is another marker of our moving into a brand-new age, (in fact some are looking to this as signaling our definitive entrance into the “Age of Aquarius”).

We have been in a 20-year series of conjunctions in Earth signs since 1842, and we enter this next series of Air conjunctions in 2020, and that will continue until 2219. The last time we were in these Air Conjunctions was 1226-1425, which brought about what is now known as the Renaissance…may it be so once again.

Next, The Chart of the USA