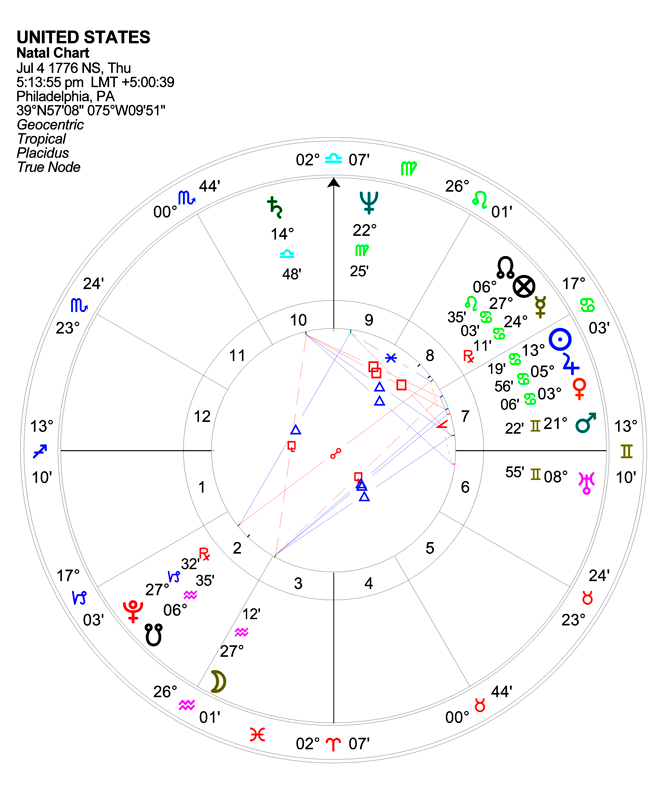 In my three previous postings we examined the near past, present and future of what are known as “Transits to Transits”, the Astrological Energy-Forms that are Universal and resonate for one and for all. Now we will turn our attention to specific charts, and the conditions articulated there by what are known as “Transits to Natal”. Like last year, I will first take into consideration the chart of the United States of America; in the next posting, I will use the same methodology to look at the conditions in Donald Trump’s chart.

In 2017 the USA was under the influence of Uranus Squaring Pluto, which posed the challenge of holding together in an integral, mutually supportive way the principle of Freer Minds (Uranus) and Centered Wills (Pluto). Given the close opposition of the USA Mercury to Pluto, this extended into a two-year theme from 2016 through 2017. We experienced an anxiety-filled and exhausting battle over thoughts/truths and the violations (trespassing) of Sacred Space that had been at play through 2016, and continued through 2017.

For 2018, there are two significant transits to the chart of the USA: 1) Saturn moving into Capricorn will oppose both the USA Venus and Jupiter; and 2) Neptune will align with the USA Saturn in a manner not seen since 1854-55.

Saturn in Capricorn
Historically, the movement of Saturn into Capricorn, which is the Sign opposite to the USA Sun in Cancer, has seemed to elicit challenges and difficulties. The three previous periods were 1988-1991, 1959-1962 and 1929-32. In each of these periods there were market disruptions which led to recessions (and, of course, to the Great Depression), and which also brought about significant shifts in the balance of political power, (1992, Bill Clinton won with, “It’s the economy, stupid!”, as the excesses of the Reagan years caught up with Bush the elder; 1960, JFK defeated Nixon as the later period after the Korean War and the Presidency of Eisenhower brought on a recession; and 1932, FDR came to power with his New Deal after Herbert Hoover’s programs failed to alleviate the agonies of the Great Depression).

While no transit will repeat exactly as it was, (as every other planet and planetary patterns have moved into new positions), there are certainly resonances and rhymes from one passage to another. This transit of Saturn over Jupiter and Venus, (the Greater and Lesser Benefics in Astrology), and then over the Sun in 2019, will most likely lead to similar challenges to what was encountered in these previous periods. We may expect to experience a period of economic challenges leading to political re-alignments just like we have before.

Neptune Inconjunct Saturn
The other major planetary aspect for the USA in 2018 is brought about by the Planet Neptune moving through Pisces, forming an Inconjunct (150° aspect) to Saturn in the USA chart. Given the orbit of Neptune is about 164 years, this exact aspect has only occurred once before, in 1854-55.

Saturn in Libra, and in the USA 10th House is said to be emblematic of our Foundational Principle, which is that the USA is a country formed by a covenant of equals. We agreed in breaking from a Kingdom to form a “self-government”. To do so our principles, patterns and rules of interrelationship would be inscribed and protected by Law, (in the USA, the Law would be King). Our abiding principle would always be that we are all equal to one another, and no one is above the Law.

But our very foundational document, the Constitution, which is based upon and formulated into the most cherished ideals, the long-hard efforts of human spiritual awakening, also encoded some of the most pernicious, vile and anti-spiritual beliefs and legal principles too. The most horrible of these was the legalization of slavery for a particular racial type, and for the purposes of maintaining economic and political power for slave-owning states, counting those slaves as 2/3 of a person for purposes of representation for those states.

During the prior passage of Neptune over Saturn in 1854-55, the struggle over the question as to whether or not any newly admitted states would be “slave or free” was bringing a spiritual/political crisis to a climax. The “Kansas-Nebraska Act” was passed declaring that henceforth each territory forming itself into a state would be able to choose whether to be “slave” or “free”. It led to advocates of both sides rushing in and battling one another for control, giving us the horrors of “bloody Kansas” and violent militia movements on both sides (as in John Brown). The political leaders of that time could not, would not, bring themselves to do the only morally/spiritually honorable thing to do, end Slavery. This lack of courage to do what spirit (and history) demanded became one of the final failures that led inevitably to the Civil War that followed.

It is not unexpected by those who study the great cycles of history, but seemingly for some quite alarming, that the “Original Sin” of America, Racism, (primarily as slavery for Africans, yet we will never forget the genocide of Native Americans, and the series of injustices faced by many, many immigrants, who came with the dream of a better world only to face the nightmare of being made scapegoats for another’s sin), that this evil that is racism is once again the leading story of our day. And, we are most painfully reminded of this every day by the words and deeds of the present occupant of the Presidency.

Just as in the 1850’s, we now in America are being reminded that there is a cost to dividing ourselves from our spiritual moral center which is fundamentally founded in the Ancient Wisdom and perennial teachings, whether Spiritual, Religious or Philosophical. That fundamental truth is this:

That every one of us is a spark of the Divine, equally of and made by love, here to be loving and loved no matter what. And to the extent that any one of us is denied their human dignity and essential value, then not one of us is truly human or free. The objectification and diminishment of any one person or group diminishes every single one of us.

There is no “freedom” for any one of us when any other, or so many, are not held as equal in spirit, equal as human to one and all. This Neptune alignment to Saturn once again reminds us that the work of Spiritual development and Human Awakening is ever-unfolding, and we are at another critical moment for our country, and for our world.

The question is will we stand for each person as our equal, whether by gender, sexual orientation, ethnic and cultural heritage, national origin, or any other individualizing determinant…will we abide and follow our great motto that is on the Seal of the United States of America:

That we are made of many, we are beautiful, diverse radiant beings who are here to hold each other as one, so that we are indeed formed as we claim to be…

The laws of Spiritual Justice are perfect; what you give is what you get.

Let us heal our wounds for one another; let us forgive but never forget.

May we love and be loved; may we sing and laugh and cry together.

Let us look one another in the eye,

Let us see the truth shining there.

Next, The Chart of Donald Trump