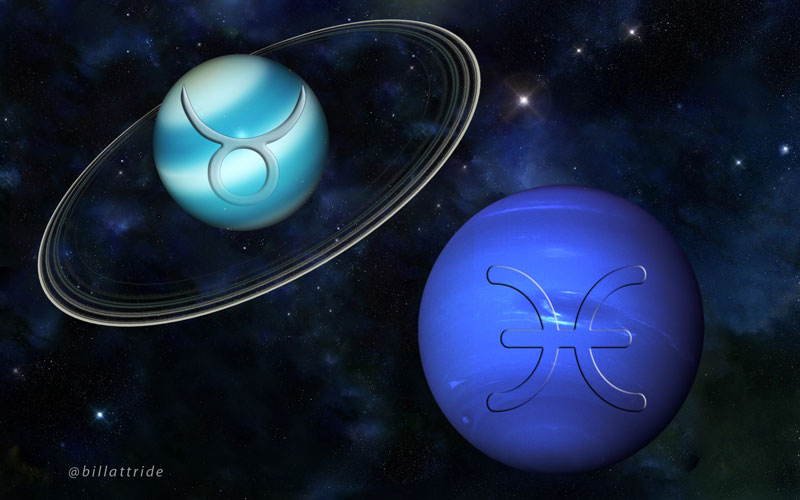 I thought it might be helpful, especially for those who prefer to read rather than listen, to have a Transcript of my comments on this topic on my latest Radio Show:

One of the more consequential themes of human social development through the ages has been the ongoing interdependent, ever-changing balance between the conditions of Individuality and Community. At various points in history, within any culture as well as between different cultures, there has been this reciprocal balance between the degree to which people are freer to express themselves as more individual, to differentiate themselves from their various groups, and times when the larger social order, (of family, community, ethnicity, and state) are able to more closely or narrowly define and often circumscribe that individual freedom.

In examining the cycle of Uranus and Neptune, we can discern a rhythm or heartbeat of this central theme of human development. Their cycle of relationship is about 170 years long, beginning at their conjunction. The last conjunctions were 1993, 1821 and 1650. At each of these moments an old order of the relationship between the individual and their “communities” ended, and a new one began. In 2017 and 2018 and into 2019 we have arrived at the first stage of their new cycle, the semi-square or 45-degree angle, or what we would call a crescent moon phase. The previous times we were at such a moment were 1845-47, and 1673-75.

It is at such a time, at the crescent phase of any planetary pair, when the emerging new theme released at the conjunction (or New Moon) is encountering the counter-vailing forces of the past. It is very much a struggle between a new way of being that is brought face to face with the fearful pulls and pushes of the old order trying to restore itself. This struggle between more individual freedom and more community or communal conformity will play out during the entire 170-year cycle again and again. But at these particular periods or moments it will certainly become more acute. We are at such a time right now.

When either of these energy-forms becomes imbalanced with the other, we either move towards extreme forms of independence, (and break our bonds of fellowship), or we bind ourselves into individuality-denying forms of communalism, (which can or will lead to the breakdown in the integrity of each member of the group). There is a need for Life, for Spirit to find itself by being One and True, but it also can only do this by being part of something greater, of belonging and being formed by something larger too. As I like to say, “We all want to be One of a Kind; but we also can only find our Meanings and Values by being part of some Kind”.

The cycle that began in 1993 has now reached a critical moment. It should be apparent and clear to many if not most people, that we are witnessing throughout the world this higher tension between Freedom and Communal life-ways, and it is ripping cultures, ethnicities, communities and even families into ever more fragmented relationships and groupings. You could say that the Centripetal force of Freedom has become severely unbalanced in its integral relationship with the Centrifugal force of Love. The egoistic, narcissistic and divisive energies appear ascendant; Love, sacrifice and communalism are in retreat. As they become unhinged or out of balance with one another, each seemingly devolves into a twisted or warped version of its higher nature.

In such a time, Freedom becomes ripped from shared affections, becoming selfish and nihilistic; then equally in response, the principle of Love becomes bounded by the fear of the unfamiliar, affections are narrowed and retreat inwardly to often anachronistic anchors like tribal groupings based on “blood and soil”. The true communal foundations of our common ancestry, that we all can trace our physical and spiritual roots to the same cause, this essential root of us all seems to devolve, and the Center that is the force that binds the entire universe, true spiritual Love, that love cannot hold for a time and societies devolve into disassociated groups, made of fear-filled groupings, tribes formed upon fear, who look upon the “the other” as the carrier of darkness, blame and fear.

Yes, it would appear, if we were only to go by the headlines and news stories, that the catabolic forces of fear and hatred are out-pacing the one abiding, true and supreme force of in this universe, Love. But we need not, nor should we retreat or succumb to fear. Because we can also find comfort and reassurance in our history. We can find inspiration and confirmation of our own responses to this challenge by looking at what came before in a time such as this. During the same moment in the previous cycle, during the 1840’s, we saw the emergence of new forms of consciousness and social organizations.

In the USA, the rising tide against slavery, the ceaseless efforts of people and groups, finding common purpose and sensibilities guided by love, flowed into the abolitionist and other social justice movements that were counterpoints to the rising tide of anti-immigrant fears and other retrogressive reactions. These fear-filled and love-countered actions were fueled and fostered by the changes in the economy and culture, as the USA steadily moved from a rural and agrarian culture into a more industrial and city-based one.

You could argue that it is not unlike our attempt to deal with the newly interconnected and fast changing world of technology that we are attempting to deal with in our own time. But as Life equals Spirit, and Spirit equals Life, the one constant truth in our journey is this experience of change. What is not constant or consistent is how we respond or react to this change. We all have a choice, to respond with fear or hope, with love or hate.

Where can we find such stirrings that will to the right balance of Individuality and Community in our time? I would argue that it perennially emerges and/or remains ever-present “locally”. That there are in fact innumerable instances, stories, and struggles of love-formed efforts being made in local towns and larger communities to solve their problems in this fast-changing world. Though we may look to leadership from “on high”, it is in these smaller, more intimate settings that our new world is being formed.

Spirit fills the spaces that are in need of greater understanding and kindliness. Each of us can do our part to right some wrong, to be more considerate of others and to help those in need. All these so-called “little acts” of love are the building blocks for the better world that is coming…for that world is coming through each and every one of us helping to make it so.