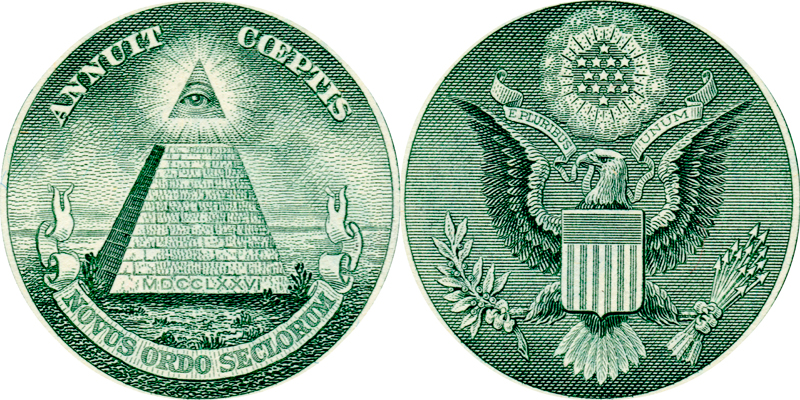 The three previous postings for the 2019 forecast, (past, present and future) concerned the universal energy-forms of planetary conditions, known as “Transits to Transits”, that reveal and inform our journey in meanings and messages for one and for all.

The principal transit in the chart of the USA in 2018 was Neptune to Saturn (an inconjunct aspect or 150°). This transit was exact from 2017 into early 2019, (although we should always look at all these outer planetary alignments as periods of time, as processes that build in over several years leading to these more exact periods of culmination).

This transit involved the challenge that any culture will face (again and again), between its present-day structures of Civil and Political Society (Saturn) and the pressure to incorporate ever more Spiritual Truths into that structure (Neptune). This was the same alignment for the USA that occurred in the mid 1850’s. That period was characterized by the struggle over the very nature of the USA, of what of kind of economy, culture and spiritual character the USA would have with regards for the principal of human equality (as is affirmed in our sacred compact, The Constitution), or turn against the tide of history and human rights and consider some as less deserving, in effect treating some as objects (i.e. slavery).

There certainly are major echoes of that struggle in our current period, with the issue of how we view the true history versus the legacy (memorials) of the Confederacy, how we treat various groups within our society, (Minorities, LGBT, Immigration, Refugees), the issue of voting rights and representation, and the continuing shadows formed by echoes of racism and the virtual genocide of the Native population.

Though this aspect will fade now, the echoes it stirred and the present-day divisions it highlighted will continue to be one of the principal challenges the USA will face for many years to come, as we will and must continually strive to finally heal these divides between our dearest ideals and our less than perfect union.

The other major theme of 2018 will persist in a modulated form through 2019, as Saturn moving through Capricorn continues to make significant alignments in the USA chart. The transits in 2018 were to Venus and Jupiter, and 2019 begins with Saturn Opposite to the USA Sun. Then throughout 2019 Saturn will Square the USA Saturn. As I noted last year, this particular series of alignments of Saturn has historically been associated with economic, and then socio-political disruptions for the USA, (in 1988-1991, 1959-1962 and 1929-32), where each time not only did strong economic challenges/disruptions occur, but these also triggered social and political upheavals.

Steering through such choppy economic waters, one would hope to have well-founded trust in a strong, steady leader and staff to help us avoid the worst economic outcomes. We can only hope that by some fortune of happenstance we will get through without too much harm, because most would agree that this necessitated form of leadership is sorely lacking now.

Pluto and Mercury – A Reckoning

Building in during 2019 and becoming fully manifest in 2020 is a rather powerful alignment of Pluto going over the USA Mercury. (I mentioned this in my radio show this past week (January 19th) and will discuss it in more depth for the next show on February 2nd, and I will also consider Donald Trump’s chart and transits).

This is a very powerful transit generally, but even more so as the USA has a Mercury Pluto opposition in its natal chart, (Mercury is at around 24° of Cancer and Pluto around 27° of Capricorn). This two-year transit will highlight a fundamental condition that has greatly influenced the character of the USA, and we may be able to anticipate by the last two alignments of Pluto to the USA Mercury what this might mean for us now.

The two previous transits of Pluto to the USA Mercury (and to Pluto) were 1981-83 and 1933-37. Those two periods mark perhaps the two most significant shifts in modern economic policies for the United States that led to two very different types of economic conditions.

During the earlier period, when the country (and world) grappled with “The Great Depression” the USA was on the “razor’s edge”, much like the rest of the world, between two paths of either Fascism or Socialism. But the USA found another way with FDR’s New Deal, and other political and economic adjustments, which created a sustainable path of growth for the next several generations (late 1940’s through the 70’s). Integral to the success of this path was that the remarkable rise in productivity and wealth was more evenly distributed among the various strata of the country.

The 1981-83 period was marked by the so-called “Reagan Revolution”, which promised that by cutting taxes dramatically, especially the top marginal tax rates, the resulting redistribution of wealth would create more growth for one and all. However, from the early 1980’s onward the share of the USA’s productive growth benefits sharply skewed to the uppermost percentiles of the population. The middle- and lower-income groups began to steadily fall behind in the degree to which they share and enjoy the benefits of the growth of productivity and wealth.

More and more people found they had to work harder and harder, as they received less and less. Other factors also contributed to this economic shift away from the more or less equal sharing of American prosperity of the previous 40 years, (the move from an industrial to a service economy, increasing automation, trade deals without enough protection or mechanisms to help affected workers, the shift to a stock market driven by the short-term profits for investment banks (the “tail wagging the dog”) as raising capital became an end unto itself rather than for productive and long-term investment, etc.). But it was the change in the marginal rates of taxation which dramatically shifted the distribution of how equitably the different sectors and strata of America benefited in the last 40 years.

What happened is that the promise of America, “of life, liberty and the pursuit of happiness”, began to fade for more and more. This was brought to bear brutally in the second “Great Recession of 2008” wherein millions of Americans saw their dream of a brighter future for their children dissolve into bankruptcy, foreclosures, bitterness, fear and anger. 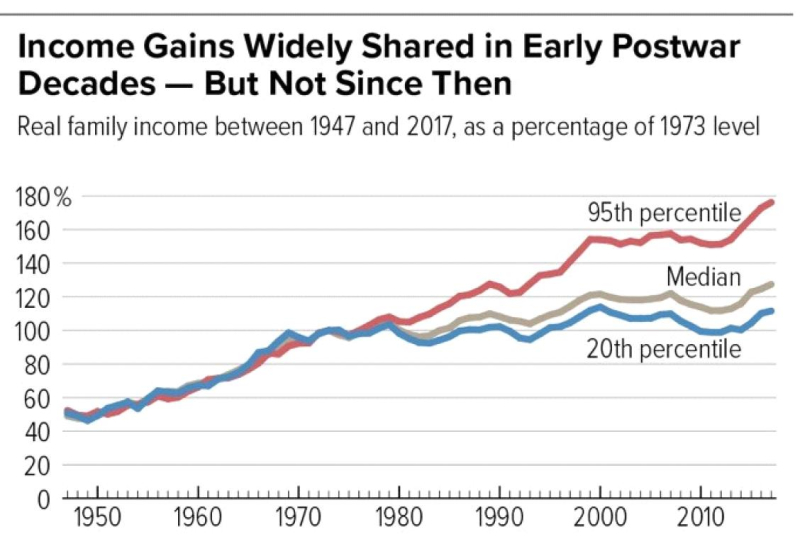 And this graph shows the skewing of the concentration of US Income for the 1%, which reached its highest point in 1929, and is now (ominously) approaching that same degree now, (just as it did in 2008): 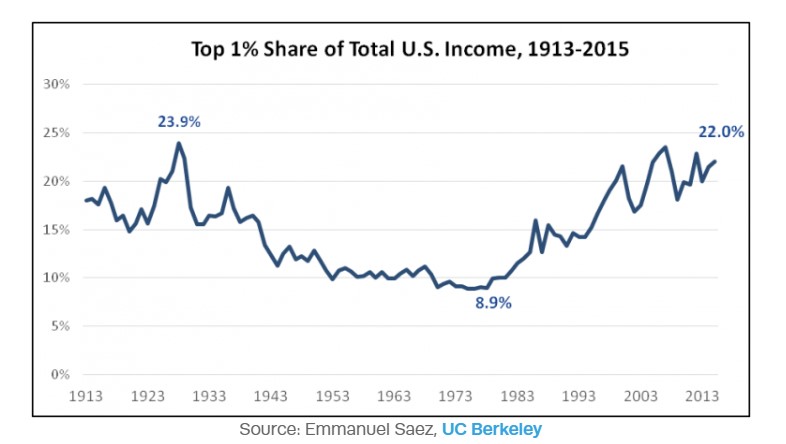 Value of a Nation

The Pluto/Mercury opposition in the USA chart is from the 2nd House to the 8th House. The 2nd House in the chart of a Nation is said to concern the “Wealth” of that nation and many would hold that means the tax revenue, stocks, bonds, shares, banks, exchanges, trade and commerce, national export and currency. It is the general “wealth and prosperity” of the people of that nation.

For me, though I agree with much of that on some level, I prefer to focus upon the root or true source of value by starting from a spiritual approach. The 2nd house will always rule “values” in any chart, and in this case, it rules the “Values of a Nation”. The question then remains, how do we know and measure (or have a scale of measurement) for the hierarchy and types of value in an entire nation?

Spiritually speaking, the Land and Water, the Forest and the Fields, the entirety of what is called “natural resources” can certainly be understood by any culture to have “value”. But the understanding and relationship with that is far different for a tribal or hunter-gatherer culture versus an agrarian culture, or some other economic-cultural type.

By sticking with the fundamental question, “what is the root source of value for any Nation?”, (or any unit of human society), I would always start with the premise that our truest measure of value is and must be centered upon what forms the people of that nation. Yes, it is true that the 2nd house also concerns the physical value of a geographic space, but what will distinguish a Nation more than anything is the value formed by and through the people of that land. Equally, and even more importantly, any society will be measured spiritually by how it treats or values those humans, and indeed how much it holds to the truth that all of life is sacred.

Considering this upcoming passage of Pluto over Mercury (and then the Pluto return in 2022), what we are witnessing is another critical moment where the very nature of our society is at stake. The rising stresses and schisms in our culture, society and politics are at the root a struggle over how we understand the nature of our core values as a nation.

We face a time much like of the 1930’s, and the USA must once again address this most fundamental question: How can we heal the divide that has formed between our various communities? How can we hold to our promise to be "A New Order for the Centuries", ("Novus Ordo Seclorum")? How can we restore our common purpose and live by the love, respect and value that we must have for one another?

We can if we remember that our very well-being, "Our Happiness", depends upon one another. We should remain true to our founding document, our Declaration of Independence, that “…we mutually pledge to each other our Lives, our Fortunes, and our sacred Honor”. For it is most certainly true that none of us can be truly happy if we do not strive to make it possible for each person in our country to achieve their Self-Fulfillment.

Our individual self-fulfillment depends upon one another. We must restore our common purpose to help one another, for we have come together, as the most vibrant and diverse mixing of peoples and cultures guided by the fundamental Spiritual Truth that we are all "ones of the One".

Our pledge to one another is reaffirmed in our motto, and together they will always point the way and hold us to our path. That motto, "Out of Many, One", ("E Pluribus Unum"), reaffirms that our very diversity is our true value and strength.

Yes, we are the future; we are a people of all peoples, cultures, creeds and faiths.

Out of Many, we are One.

Next, The Chart of Donald Trump