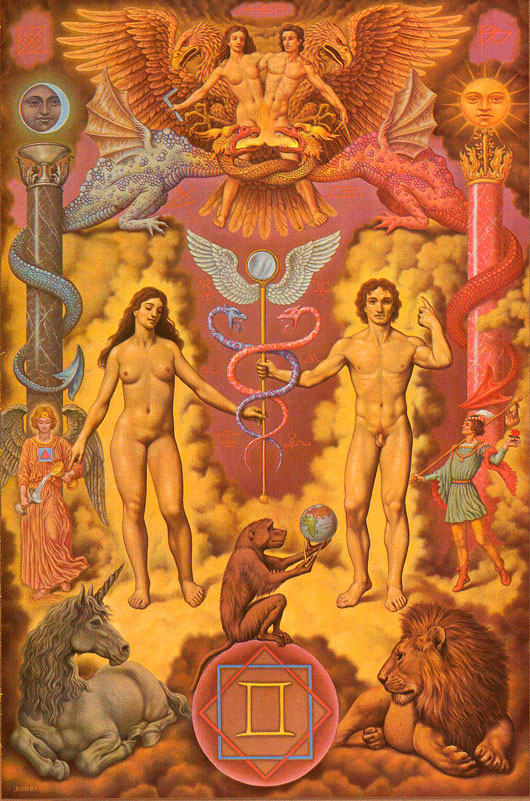 The Gift of Knowing

In all the great myths, in all the great religions and teachings that have been handed down through the ages, there is that singular moment in the story of humanity when we moved through the portal of self-consciousness. Long, long ago, we went from a state of simple consciousness (a relative innocence) and into the realm of subjective-objective consciousness. We became self-aware, conscious of the essential duality of reality, of this and that. It was the time in our journey at which we truly knew, we became painfully aware, that we are in some way separate from the Ocean of Spiritual Oneness.

We were more and less, separated into “The Knower and the Known”. We moved into a form of being that shapes our journey to this day, as we dwell in this state of self and of other. We became elevated by the knowledge we could then acquire, and this became the source of our protean power to change ourselves and our world. Yet we also felt the loss, and we continue to be brought to sorrow and shame by our still limited understanding about the nature of ourselves and our world.

Whether it is the story of Prometheus stealing the “Fire of the Gods”, or Adam and Eve eating from the Tree of Knowledge, it is held by the Ancient Wisdom that we experienced this quickening which equally formed our ability to better understand ourselves and the worlds around us. Yet, in many of these myths our advance into a greater awareness is portrayed as also being a “fall”, of leaving a state of innocence or at-one-ness with Creation as we moved into the experience of our separation from the Greater Reality of the One.

According to the Ancient Wisdom, the Story of Spirit is also the Story of Consciousness. It is the Mind of the One as “The One”, who to form Creation becomes the many, dividing into the countless sparks of the Divine, the monads of Spirit which are the root cause or seed behind every mote and speck of Creation. And then, from that beginning, all these “little minds” began their journey of Spirit, of Consciousness, as they moved up and outwards into ever more encompassing experiences of the Greater Reality over the ages and ages of a Cosmic Age. The Story of Spirit is the story of all these ones who slowly lift up themselves to ever higher levels of consciousness, which is in fact the story of the Mind of the One.

For us, today, we begin our monthly journey through the Sign that holds this portal to consciousness, the Sign of Gemini. At this time, and wherever Gemini is found in your chart, you are blessed with the “Gift of Knowing” that is one of the most consequential faculties you require as you walk the path of fulfillment as a human. That Apotheosis will arrive when you have moved from your more limited consciousness into what will be a truly “Encompassing Consciousness” of your oneness with “The One” again, and that is known in the Ancient Wisdom as the state of Cosmic Consciousness or Nirvana.

While we are human, we are the means to one another’s awakening. The development of your awareness depends upon all those who came before you as your consciousness within and the creations around you are the gifts of your ancestors to you. And you most certainly are dependent upon those with whom you live in this moment now for what you may achieve in this life too.

Always remember, the greatest illusion we must transcend is this physical experience of being separate from one another, when in truth we are a hierarchical host of energy-forms that intersect, blend, and inform, as we share and make this journey with one another always. In truth, all these bodies that connect us make us who we are, but most certainly our “body of consciousness” is even more formed and elicited, shaped, and supported and uplifted by all of our many experiences with one another.

From the beginning of your awakening, the way to your fulfillment has always been the same. It is the message of Gemini, carved upon all the temples of antiquity:

But it is equally true that you will only know yourself, you will only be who and what you are, when you see the other as yourself. When you look into the eyes of whoever is before you, when you see shining there the sparkling Spirit of Knowing, it is then that you will smile because you know we are the Light which is the Divine, "whose center is everywhere and whose circumference is nowhere".

It is then that you will know the truth that is there in you and in all things too.

We are the Divine.